Celebrating the Not so Happy Moments

Did that title catch your attention?  Yeah I know its a weird one but I will explain. 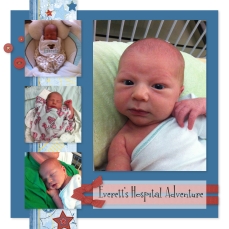 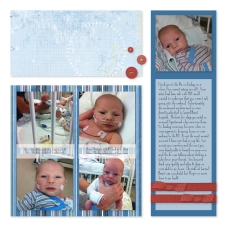 So today is the 2 year anniversary of one of my worst days.  When my son was 5 days old he quit nursing so I took him to the Dr.  They told us he was positive for RSV and needed to be hospitalized immediately.  Apparently Newborns can bottom out fairly quickly with this evil virus and so we ran home to pack a bag not sure how long the stay would be.  They poked him, they prodded him and made him very uncomfortable.  He was still so sweet and little and happy.  He was barely sick.  I had no idea what the next few days held for us.  He went downhill some but it became so frustrating because everything they were doing I could have done at home.

On day 5 of our stay the Dr said if his stats held through the night that they would let us go home.  What ominous words those were.  He bottomed out around 4 that morning and after several attempts to help him recover one of the biggest men I had ever met (a respiratory therapist with huge hands) grabbed my tiny son up and said if we don’t go now there may be no going back and carried him across to the NICU.  (the picture on the second page that is taken through the bars of the hospital bed was in the midst of this moment.  I thought it may be the last picture I took of him.  It was also the photo that I sent to my husband telling him to come quick.  He arrived to the hospital in tears) About this time the chaplain for the hospital and my minister showed up (them both being there was pure coincidence) making the situation totally surreal.  They shoved tubes down his throat, IVs in his arm and I watched from the back of the room as the Dr.s worked their magic.  Ev just stared at me and I prayed I fell on my knees in the hospital room and prayed.  My husband, best friend, mom and I  waited for him to become stable and within minutes they knew he would be ok.  He remained in the NICU for 3 days and after 10 days we finally got to go home.

2 years later he is a happy, healthy, rambunctious 2 year old. 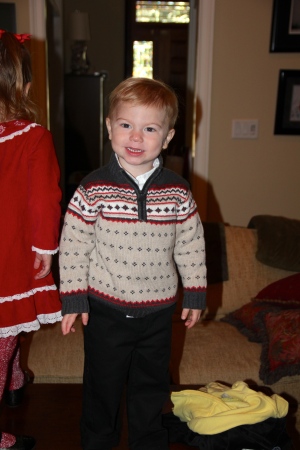 When I was able to recover and hold it together I started to scrapbook again.  My husband thought it was so odd that my first layout was Evs “Hospital Adventure”.  It was therapeutic.  I had fought for my child, I had fallen on my knees and prayed for him and God showed up.  I was proud of us and I knew that I wanted to capture that moment in time so that when he was 18 he would understand what we had gone through.  I love being able to share this story, It may just be through paper and pen but he will know it was an important moment.  I think we need to capture our lives to share with our children and it may not always be happy but they need to know there are hard times.  They need to know how hard we fought.  They need to know we were sad or afraid but we got through.  My scrapbooks tell my family’s story!  I challenge you to tell your story through your memory/scrapbooks.  A lot of times the hard times help create a stronger you.  Make sure to capture those moments also.  Tell your whole story.

I love to scrapbook and papercraft.  It is my stress relief but it stresses me out when I get behind in my scrapbooking.  Enter Studio J my perfect bridge between the digital and traditional world.

February and March are sure to be months of digital delights because you can purchase anyStudio J® layout for only $5—that’s a savings of $1.95 per layout! This is a great opportunity to try Studio J for the first time. Create adorable baby layouts with the Wishes and Fishes kit (shown), or use the new Express Collections with collections of 10 ready-made layouts plus a front and back cover that are easy to use and professionally designed. Preserve your memories at a low price for a truly digital delight!

I am going to sweeten the deal a little more for the month of February for every 5 layouts you purchase through Studio J I will enter your name into a drawing for a My Legacy album with page protectors.  Not only will you get your memories scrapbooked but I am going to give you a beautiful album to put them in.  I am including a few layouts that I recently completed for a heritage album for my family. 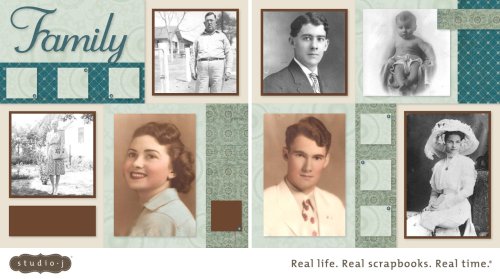 It is no secret that I love love my Cricut.  I am kind of addicted to it.  What makes the addiction even more crazy is how Close to My Heart makes everything go together.  The Cricut cuts out shapes that match a stamp set that matches a paper pack….WHAT!!  Mind blowing paper crafters dream!  Here is a great video on the Cricut and specifically the cricut craft room.  Its a good one to watch!

Where does the Time Go?

So I made a New Years resolution to be better about blogging…Well I guess I have blogged more than I did last year! 😉  Not really what I had in mind.  I have a good reason for being out of pocket the last two weeks though.  Last week I went on the most amazing vacation thanks to my great customers and Close to My Heart.  Thats right I earned the CTMH incentive cruise!  They wined and dined us it was pretty amazing!  And I got to talk to some pretty amazing creative people.  What was one of the biggest things I got out of these talented women…I need to blog more.  So I had planned on coming home and jumping right in but a sinus infection has had me pretty down.  Thanks to a Z pack I am back in full force and ready to start fresh.

I have my big crop coming up this weekend and I am really looking forward to it.  I have been super busy working on create and takes and projects.  This one will not disappoint!  I havent had a chance to take pictures yet.  Most things are still drying but I wanted to share the fun Valentines box I created for my son.  He was so proud of it!  Stay tuned much more to come.